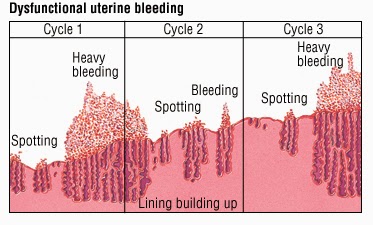 Dysfunctional uterine bleeding (DUB) is irregular uterine bleeding that occurs in the absence of recognizable pelvic pathology, general medical disease, or pregnancy. It reflects a disruption in the normal cyclic pattern of ovulatory hormonal stimulation to the endometrial lining. The bleeding is unpredictable in many ways. It may be excessively heavy or light and may be prolonged, frequent, or random.

About 1-2% of women with improperly managed anovulatory bleeding eventually may develop endometrial cancer.

Surgery should be considered only in patients in whom medical treatment has failed, cannot be tolerated, or is contraindicated
Endometrial ablation is not acceptable as a primary therapy, because the procedure can hamper the later use of other common methods for monitoring the endometrium
Regardless of patient age, progestin therapy with the levonorgestrel intrauterine device should be considered; contraceptives containing a combination of estrogen and progesterone also provide effective treatment
Low-dose combination hormonal contraceptive therapy (20-35 μg ethinyl estradiol) is the mainstay of treatment for adolescents up to age 18 years

Either low-dose combination hormonal contraceptive treatment or progestin therapy is generally effective in women aged 19-39 years; high-dose estrogen therapy may benefit patients with an extremely heavy menstrual flow or hemodynamic instability
Medical treatment for women aged 40 years or older can, prior to menopause, consist of cyclic progestin therapy, low-dose oral contraceptive pills, the levonorgestrel intrauterine device, or cyclic hormone therapy
If medical therapy fails, patients should undergo further testing (eg, imaging or hysteroscopy)
An in-office endometrial biopsy is preferable to dilation and curettage (D&C) when examining a patient for endometrial hyperplasia or cancer
If medical therapy fails in a woman in whom childbearing is complete, hysterectomy without cervical preservation may be considered
Signs and symptoms
DUB should be suspected in patients with unpredictable or episodic heavy or light bleeding despite a normal pelvic examination. Typically, the usual moliminal symptoms that accompany ovulatory cycles will not precede bleeding episodes.

Because DUB is considered a diagnosis of exclusion, the presence or absence of signs and symptoms of other causes of anovulatory bleeding must be determined.

Patients who report irregular menses since menarche may have polycystic ovarian syndrome (PCOS). PCOS is characterized by anovulation or oligo-ovulation and hyperandrogenism. These patients often present with unpredictable cycles and/or infertility, hirsutism with or without hyperinsulinemia, and obesity.

Other signs of underlying pathology include the following:

Studies used to exclude a pathologic source of anovulatory bleeding include the following:

In obese patients with a suboptimal pelvic examination or in patients with suspected ovarian or uterine pathology, pelvic ultrasonographic evaluation may be helpful. Ultrasonography can be used to identify uterine fibroids, as well as endometrial conditions, including hyperplasia, carcinoma, and polyps.

Rule out endometrial carcinoma in all patients at high risk for the condition, including those with the following characteristics:

Morbid obesity
Diabetes or chronic hypertension
Age over 35 years
Longstanding, chronic eugonadal anovulation
Traditionally, carcinoma was ruled out by endometrial sampling via dilation and curettage (D&C). However, endometrial sampling in the office via aspiration, curetting, or hysteroscopy has become popular and is also relatively accurate.

Most endometrial biopsy specimens will show proliferative or dyssynchronous endometrium.

Abdominal or vaginal hysterectomy may be necessary in patients who have failed or declined hormonal therapy, who have symptomatic anemia, and who are experiencing a disruption in their quality of life from persistent, unscheduled bleeding.

Endometrial ablation is an alternative for patients who wish to avoid hysterectomy or who are not candidates for major surgery.